According to Zurich Municipal, schools in England are 1.7 times more likely to suffer a fire than other commercial buildings.

The study, carried out using data from 26,800 schools across the country, showed that firefighters had been called to nearly 2,000 school blazes over the last three years. 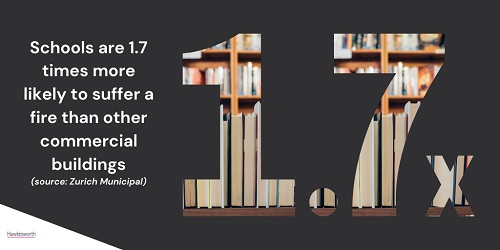 Malfunctioning appliances and equipment, faulty electrics, arson and kitchen fires are amongst the leading causes of school fires. There is also a correlation between poor OFSTED ratings and a greater risk of fires.

A potential bill of over £20 million

A fire in a school environment can cause major issues. Not only is there a risk to life, but fires can be a major expense that some schools struggle to recover from.

Fires can cost on average £2.8 million to repair, with some larger and older schools having to foot a bill of over £20 million.

There is also the disruption to learning. Fires can set children’s development back, which is an inconvenience at the best of times; more so following the forced closure of schools during the coronavirus pandemic.

Darren Tonge, Sales Director at Hawkesworth said: “Schools are full of potential fire hazards that must be managed carefully. Not only is there electrical equipment like monitors, projectors and computers, but also specialist equipment including laser cutters, kilns and combustible materials, like those in a science laboratory.

“Schools with catering onsite also pose an increased risk of fire as there is more equipment that could malfunction.”

Regular electrical equipment inspections (also known as PAT testing, or portable appliance testing) will not eliminate the risk of fire in an academic environment. However, it can help reduce the risk by identifying old, damaged and malfunctioning equipment that could cause electrical fires.

In a school environment, we can carry out testing outside of term time or outside of school hours to reduce disruption (starting as early as 6am).

All of our engineers are Data Barring Service (DBS) checked and qualified in City & Guilds Electrical Equipment and Maintenance Testing (2377) for peace of mind.

If you would like to find out more about how electrical appliance testing can help reduce the risk of fire in your school, contact Hawkesworth today.